What About the Plank? Judging the Founding Fathers. 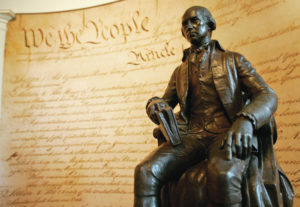 Over the past few months, all of us have been under stress with COVID-19, murder hornets, and the protests/riots/looting that took place in our country.  Like many of you, I’ve tried to adapt and stay busy as I continued to monitor the news.  Also, like you, I have been thinking through all these events.  Other than the murder hornets, because they just seem to have disappeared, there is controversy surrounding all of it.  As a pastor, I can tell you that COVID-19 has forced me to navigate my church through some troubling waters.  We’ve had to choose between live or virtual services, masks or no masks, and exactly how does social distancing work with a church family that traditionally greets each other by shaking hands and exchanging hugs.  All these decisions haven’t been in a vacuum due to a vast array of opinions within the church.

But in perspective, these issues seem quite small when looking at all the social unrest in our country.  At 51, it’s unlike anything I’ve experienced.  These issues are undoubtedly causing strife among many as lines are drawn in the sand.  One particular issue concerns statues representing our country’s founders and influential men in our nation’s history.  Should those statues remain, or should they be removed?  I want to bring some perspective to this issue as a concerned citizen of this country and as a pastor because I do believe God’s word can give us some guidance.

It is my understanding that individuals/groups want these statues removed because the men we have memorialized were racists and/or they owned slaves; therefore, we cannot continue to honor them.  My first question would be, “Does the sin of racism and/or slavery negate all the “good” that was accomplished by these individuals?”  I think my second question would be, “Who gets to choose which sins make a person irredeemable?”

Let me begin by making these statements.

So, if you’ve read this far, perhaps you are curious.  Why would I suggest that we ought to keep the statues/monuments of these founders even if they were slave owners?  I began to reach this conclusion by merely studying scripture for an upcoming sermon.  I’ve been preaching through the book of Romans, and in Romans 4, Paul is addressing salvation by faith alone, and he looks at two of the most significant figures in Israel’s history – Abraham, the father of the Jewish nation, and King David, the greatest king in all of Israel’s history.

When studying this passage, without a doubt, I needed to go back and read about the life of Abraham and David.  I often remind my church that although many believers know the general facts about these two men, many of the details we fail to recall.  These are certainly two men that were revered by their nation.   These guys were, if I may say, bigger than life.  Just think for a moment. 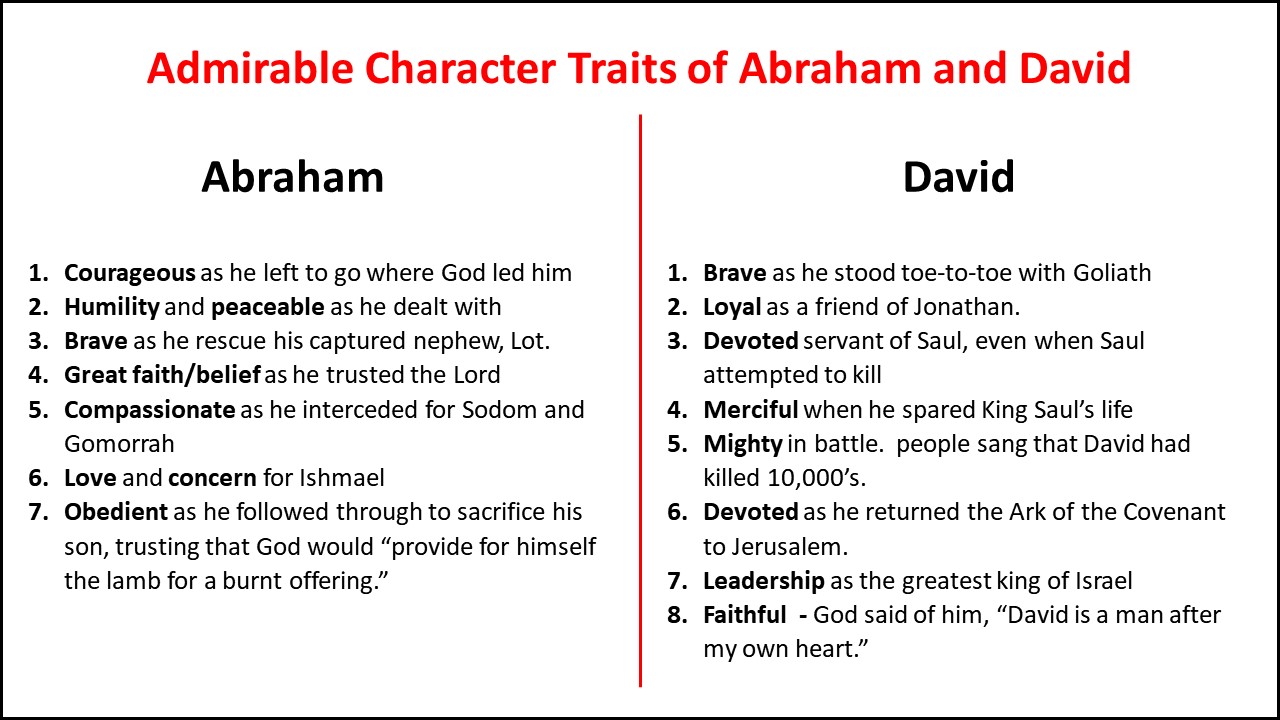 Godly men, but as many sometimes forget, extremely flawed heroes.  These were men who did acts of faith that humble me, but these were also men that did things that are unthinkable to me. 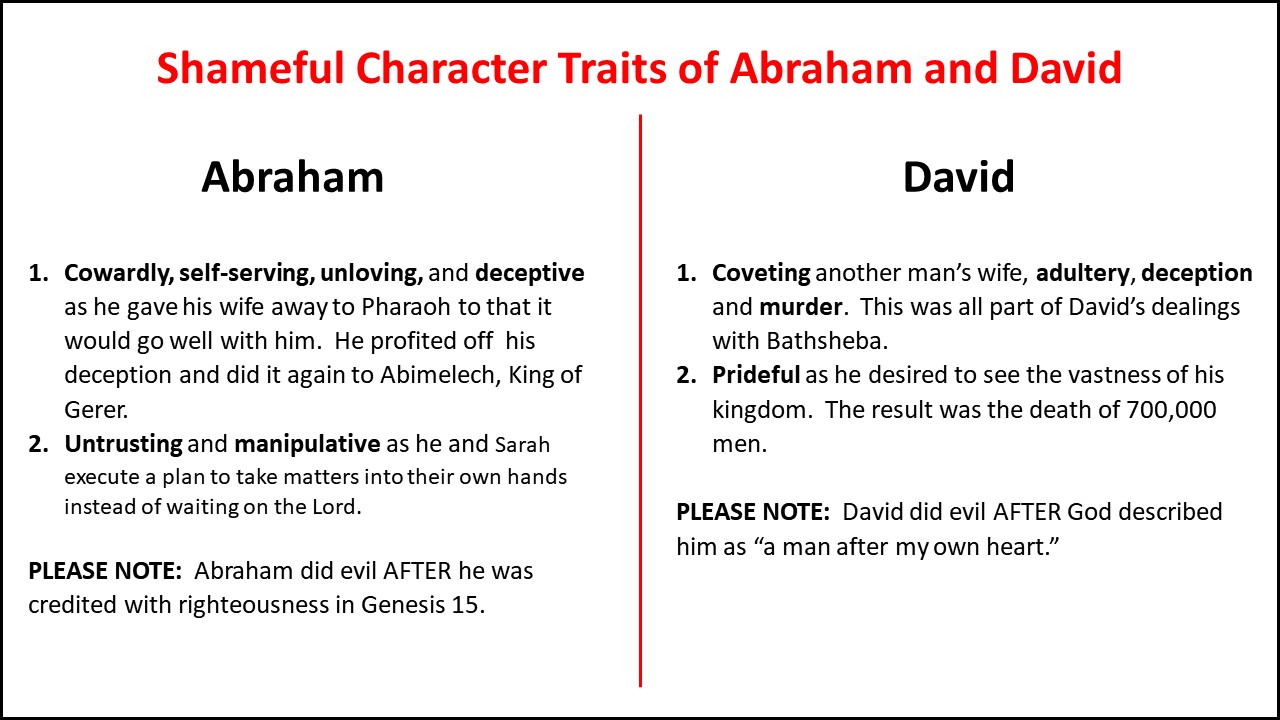 Abraham gave his wife away to the Pharaoh of Egypt and profited off of that.  Sarah was so beautiful that she went into Pharaoh’s house, and Abraham gained “sheep, oxen, male donkeys, male servants, female servants, female donkeys, and camels.”  When Pharaoh discovered what Abraham had done in lying to him and giving him Sarah, Pharaoh was beside himself and questioned why Abraham would do such a thing.   Abraham was no longer welcome and sent away.  God credited Abraham with righteousness in Genesis 15, and after, in Genesis 20, Abraham lied about his wife again, and she was taken in by Abimelech, King of Gerar.  After all, it worked the first time.  Let’s also not forget that in chapter 16, both Sarah and Abraham execute a plan to take matters into their own hands, and Abraham has a child with Hagar rather than waiting on the Lord.  Remember, it was just one chapter back (Genesis 15) that Abraham believed that God would give him offspring.  The world is still paying for that sin today.

David was a man who coveted another man’s wife (Bathsheba).  David then committed adultery then attempted to trick Bathsheba’s husband, Uriah, in order to hide that Bathsheba was pregnant with David’s son.  Finally, David had Uriah, a devoted and honorable soldier in David’s army, murdered.  By God’s law, David deserved to die.  His sin caused untold anguish and deaths because, due to his sin, the sword never departed from the house of David.  Later, because of David’s pride and his desire to know how great his kingdom was, his sin brought about the judgment of God upon Israel, and 700,000 men died in three days.  To give you some perspective, as of Thursday, July 9, 2020, the total number of COVID-19 deaths worldwide is a little over 550,000.

Abraham and David were great men but also sinful men.  Scripture paints an accurate picture of who these men were, and so it is for all men and women, including our founders.  We are all flawed, and so are all our heroes.  Jesus warns us about taking the speck out of the other person’s eye while ignoring the plank in our own.  That warning is due to our tendency to magnify the sins of others while minimizing our own.  So, I would ask, “What about that, plank?”  The danger is that you might be “woke,” but still unable to see.  In other words, your eyes might be open, but that plank is blocking your vision.

1.  Did we fail to learn the whole story?
Is it possible that my generation only learned of the heroic deeds of our forefathers, but was unknowing of the horrific thoughts/attitudes/actions?  That is certainly possible.  But is it also possible that the pendulum has swung the other way, and the current generation has only heard the horrific? Is this generation “woke” to the sacrifice, courage, and heroism of the men and women who founded our country?  In both cases, we failed to present the full truth.  Those statues exist because we remember and honor those who accomplished the spectacular, heroic, and astounding.  They did what the vast majority either could not or did not do, but these statues were not put in place because these men were flawless.  They were not sinless.  If that is the litmus test, then ALL monuments remembering great men and women must come down, because they were all flawed.  That includes the men and women you admire and their statues/monuments.  They, too, were flawed.

2.  Are we failing to see the plank in our own eye?
Are we judging our founding fathers’ and their generation’s sinful acts of slavery as immoral while ignoring the “immoral plank” in our current generation’s eye?  Don’t misunderstand what I am writing.  Slavery practiced by our founders was immoral and sinful, there is no debate about that, but how would George Washington, Thomas Jefferson, and Abraham Lincoln view our current moral standards?

I am not suggesting that we ignore the sins of the past simply because we, too, are sinful, but I do believe that we must be cautious of the self-righteousness that is so prevalent in today’s culture.  We live in a country that is still very deep in sin, and while we ignore the plank in our own generational eye, it seems incredibly easy to point out the speck in the eye of previous generations.  How would our morality/standards be judged by those who came before us, or how will it be judged by those who come after us?  Have we truly fallen for the lie that we are “Holier than thou?”

3.  Have we forgotten who God justifies?
I have some news that is going to shock many of you.  There will be racists and slave owners in heaven.  There will be the sexually immoral, idolators, adulterers, homosexuals, thieves, the greedy, and drunkards in heaven. There will be Republicans and Democrats in heaven, as well as, people who toppled statues and people who fought to keep them in place.   There will even be murderers in heaven, but all of them, every single one of them, will be washed.  They will be justified by God NOT because they were good nor because they became sinless or blameless.  Romans 4 makes it clear . . . God justifies the UNGODLY.  So, the answer to my second question is simple to answer.  “Who gets to choose which sins make a person irredeemable?”  The answer is, “God.”  God makes it clear that if you put your faith and trust in him, there is no sin in your past NOR any sin in your future that is irredeemable, except rejecting Jesus Christ.  Slavery and racism are redeemable by the grace of God.  We are justified by GRACE ALONE.  And listen to me, we better be grateful that God, through his grace and mercy, justifies the ungodly because if not, none of us would make the cut – “For all have sinned and fall short of the glory of God.”  (Romans 3:23)

Let me end this blog by stating this.  I didn’t write this blog to defend the sinful thoughts/actions of any founding father.  As a pastor and believer, I also do not attempt to justify the sinful thoughts/actions of any biblical character, even the heroes of the faith.  How could you possibly defend the actions of those who treated men and women as property?  How could you defend King David’s theft of another man’s wife and murder?  All (including biblical heroes and founders) were blind, deaf, lost, and dead in their sin.  All of them were ungodly, but that does not mean that these men and women were devoid of characteristics that should be greatly admired and emulated.  Let us remember why we memorialized them, but let us also remember, they were just men, wretched sinners, just like all of us in need of a savior.  They needed the grace and mercy of God the Father.  They needed the sacrifice of God the Son.  They needed the conviction of God the Spirit.  Their sins were great, and so are our sins.  The Holy Trinity redeeming sinful men and women is what was needed then, and it is needed now.  To be truly “woke” is to understand this truth.

All honor, glory, and praise to God and God alone.